The 3rd REGATRACE workshop in Ireland was attended (by Zoom) by 32 participants – invitee list attached. In advance of the meeting the draft Roadmap and draft country specific D6.4 Draft Guidance for feasibility analysis covering biomethane investments, were circulated.

REGATRACE (Renewable GAs TRAde Centre in Europe) aims to create an efficient trade system based on issuing and trading biomethane/renewable gases Guarantees of Origin (GoO). This will strongly contribute to the uptake of the European common biomethane market.

This objective will be achieved through the following founding pillars:

A network of issuing bodies will be established by including existing national biomethane registries (in Austria, Denmark, Estonia, Finland, France, Germany, The Netherlands, Switzerland and UK) and by establishing issuing bodies in the “target” countries of the project (Belgium, Spain, Ireland, Italy, Poland, Lithuania and Romania).

A stable, reliable and common market for biomethane and other renewable gases in Europe can help achieve EU political targets and decouple its energy systems from fossil fuels: biomethane/renewable gases can be produced from waste or residual streams of organic material and they can be transmitted and stored in existing infrastructures, making it possible to combine the European natural gas and electricity grids.

Furthermore, the project will define guidelines on renewable gas sustainability certification. REGATRACE will also develop a country tailored guidance for feasibility analysis and a guidebook on securing financing for investments to assist biomethane project developers.

This project receives funding from the European Union’s Horizon 2020 Framework Programme for Research and Innovation under Grant Agreement no. 857796

This project consists of the development of a large-scale central injection hub on the Irish gas network, along with a fleet of gas storage trailers and trucks, to transport biomethane by road to the injection hub. Alternatively the biomethane will be delivered via a direct grid connection. Project GRAZE is being developed by Gas Networks Ireland in Mitchelstown, Co Cork to accommodate the AD plants developed as part of the Agribio-CNG project. 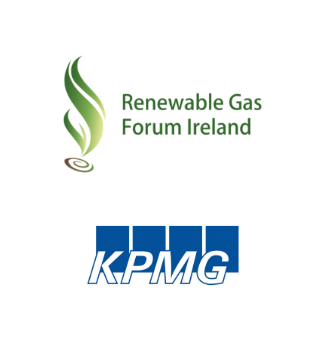 An Integrated Business Case for Biomethane in Ireland.

RGFI commissioned this KPMG report and submitted it to the Department of Communications, Climate Action and the Environment in October 2019. The report sets out options on how to fund the industry, and a detailed implementation plan on how to deliver 12% renewable gas by 2030. It provides a full Cost Benefit Analysis in compliance with the Public Spending Code and a comprehensive Wider Economic Benefits Case, which shows a net positive for the exchequer of €1.26 for every €1 spent. Significant market research was undertaken across the entire supply chain to identify the optimal business model.
Back To Top
×

This Certification Scheme provides confidence and reassurance to the gas consumer regarding the sustainable production of biomethane from anaerobic digestion. It will track the sustainable criteria for biomethane production in compliance with RED II, applying a full life cycle assessment analysis, to trace all emissions associated with the production and consumption of the gas.

The Irish Green Gas Certification Scheme demonstrates best practice drawn from world leaders. Its blueprint was developed in 2018 by the German agencies DENA  and DBFZ, both seen as world leaders in this field, co-ordinated by the International Energy Research Centre (2017) and supported by the Centre for Marine and Renewable Energy Research, University College Cork, GNI and RGFI.  RGFI and GNI jointly hold the licence for the Scheme.